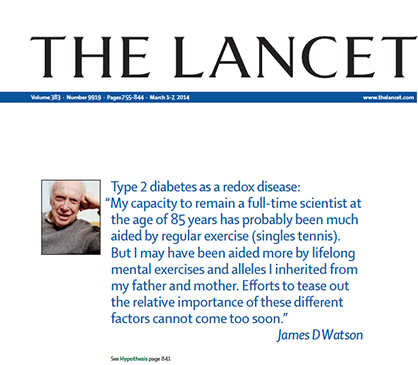 At 85, Nobel laureate James D. Watson, the co-discoverer of the double-helix structure of DNA, continues to advance intriguing scientific ideas. His latest, a hypothesis on the causation of type 2 diabetes, appears online February 28th in the The Lancet, the prestigious British medical journal.

Watson’s hypothesis, which is featured as The Lancet cover story in the U.S. print edition dated March 1-7, 2014, suggests that diabetes, dementias, cardiovascular disease, and some cancers are linked to a failure to generate sufficient biological oxidants, called reactive oxygen species (ROS). Watson also argues the case for a better understanding of the role of exercise in helping to remedy this deficiency. (from cshl.edu article Feb. 27, 2014).

Hi, my name is Matteo Magaldi. I'm an Enterpreneur and a Web Marketing Expert. I like to share my experiences and ideas through this blog. Go to the contact page to know a little more about me...

My marketing promos for you

Your Guest Posts on Pure Healing

Main rule: your post must not be commercial, but informative and useful for the public and your sign with your references can be inserted.

Send an email to support@pure-healing.net and we will create an account for you.

The opinions and testimonies expressed on this website do not claim to treat or cure any diseases. Do not alter or discontinue any current medical treatment based on information from this page.